Over 20 years Foundry Solutions & Design has established itself globally as a project manager, engineer, developer, and innovator in project and process technologies – in fact as the center for metalcasting expertise.

Metalcasting has been developing for thousands of years, and from that perspective 20 years is merely a flash, but the past two decades have been different than everything preceding them: Casting buyers expect more consistency, higher product quality and lower cost now, so foundry operators have had to emphasize market-responsiveness over process innovation. Today, proficiency in metalcasting technology is distinct from production; it’s developed and honed by engineers and designers working outside the foundry.

That’s the case with Foundry Solutions & Design, the engineering and consulting group marking its 20th anniversary this month. With metalcasting organizations operating as lean enterprises, limited in man-power and short of expertise, FS&D offers the creativity and ingenuity that defines the state-of-the-art in metalcasting technology.

Foundry Solutions & Design LLC was established in July 2001 when the senior managers of a design and engineering business acquired the enterprise established just six years earlier as a Georg Fischer/DISA joint venture; the foundry group and its capital equipment partner had decided to spin it off, refocusing on their core activities.

Ralph Perkul and Larry Ernst, who continue to direct FS&D’s operations, had many years of practical experience in metalcasting operation. Perkul is a graduate of Penn State University’s Industrial Engineering school’s metalcasting program and has been involved with foundry plant design and construction for over 55 years, while working at WABCO, Swindell-Dressler Engineering, Foundry Design Co., and ABB.

Ernst is a graduate of the University of Oklahoma’s Metallurgical Engineering School and has been involved in casting design, development and production for 47 years, including with Ford, John Deere, and Tyler Pipe.

The new company continued the projects it had underway at the time of its launch, retaining all the customer knowledge, skills, and experience of the team that had been previously assembled for DISA Engineering joint venture.

FS&D’s first major project was engineering an expansion of the Advanced Cast Products foundry in Meadville, PA (now a Neenah Foundry holding), which included a new building housing a large vertical molding machine. Shortly after that, a multimillion-dollar project for Caterpillar Inc. involved flexible, robotic automation for finishing various cylinder head castings.  “These two projects assured us of repeat business,” Ralph Perkul noted: “Five subsequent assignments at Neenah and over 20 assignments at various Caterpillar foundries. About 70% of our business continues to be from repeat customers, including about 200 foundries in North America alone.”

Over 20 years, FS&D has completed over 900 projects around the world, including 52 greenfield and “brownfield” foundries, with a development budget of over $2 billion. In addition to the ferrous foundries at its launching, FS&D has done work for aluminum, brass, and exotic alloy foundries, including diecasting, investment casting, precision molding, centrifugal casting, no-bake molding, and green-sand molding, including tight flask and matchplate horizontal molding as well as vertical molding.

The portfolio of services available to metalcasters range from foundry “audits” to engineering and construction of complete plants. In between, they may choose strategic analysis and feasibility studies, site selection and master planning, computer simulation and training programs, project management and equipment installation, just to name some of FS&D’s present capabilities.

Over two decades the firm has expanded the scope of its engineering work, applying modern plant design concepts to foundries, like high-density, high-level automated storage and retrieval systems for cores, molds, and castings; Level II data acquisition systems for plantwide financial and operational control; and automatic, vision-based inspection for cores, molds and castings, among innovations that help to make FS&D customers more competitive and profitable metalcasters.

As the business has grown over 20 years, so has its foresight for changes underway in the metalcasting sector. According to Ralph Perkul, at the present time there is growing number of businesses seeking to “in-source castings, from the U.S. rather than from abroad, or to work with companies that typically do not own their own foundries but want to develop that capability in order to better control their supply chain.” That presents new opportunities and expectations for domestic foundries – and new projects for FS&D to undertake.

Another aspect of the 20-year progress is that FS&D’s expertise of metalcasting design and processes now includes well-earned insight to the forces shaping foundry operations. For example, Perkul pointed out that securing qualified foundry workers is a worldwide problem that influences how they invest in production capabilities.

“Metalcasters need to continue to work on ways to reduce their labor content,” he said, “especially in the finishing department, where the largest number (of workers) are employed . Automating the finishing process not only results in lower labor content (per casting) but also improved quality, by introducing consistency to the process.

“Any advancement that can reduce labor , improve quality and improve the plant’s environment are always of primary interest to our customers and foundrymen all over the world,” he continued.

Such insights are valuable to customers because they are based on extensive experience as well as current activity. At the present time FS&D is working on several projects for North American customers who are bringing casting production back from abroad, mostly high-production facilities in the automotive/transportation sector. It’s also involved in several greenfield projects oversees, where manufacturers are “localizing” production of currently imported castings, such as valves, rail parts and truck components.

The history of metalcasting has involved experimentation and experience. The present and future, however, are proceeding thanks to the expertise and insights of designers and engineers, like those at FS&D. “Our outlook for engineering for metalcasting processes and operations is very optimistic,” Ralph Perkul revealed. “We are seeing strong demand for our services now and for the foreseeable future, and this bodes well for the foundry industry.”

Brembo, the world leader and acknowledged innovator of brake technology, had a successful first pour at its all-new cast iron foundry in Escobedo, Mexico today.

• The facility will cast iron rotors for Brembo’s nearby disc machining plant
• Melting capacity of approximately 70,000 tons per year
• Cast iron foundry is 269,000 square feet
• Aluminum calipers have been in production at Escobedo since October 2016
• $131 million investment between the two Escobedo facilities
• Between the two facilities Brembo has created 700 new jobs since November of 2016
• Second North American foundry operation, first operates in Homer, Michigan (266,000 square feet) which opened in 2015

The first pour is a preliminary test of the facility that ensures all systems are functioning properly and is the first step in testing the foundry’s full production line in anticipation of the facility’s production ramp up. During this test, the foundry’s furnaces were charged and the molten raw material from these furnaces was poured into a mold for the first time.

All systems in Brembo’s new cast iron foundry performed as expected. The cast iron foundry now joins Brembo’s adjacent aluminum foundry where the company has been making its trademark lightweight, high-performance, aluminum brake calipers for over a year.

It is the ninth foundry in Brembo’s worldwide foundry network and the second cast iron foundry Brembo has built in North America.

Brembo, the world leader and acknowledged innovator of brake technology, conducted the first pour at its all-new cast iron foundry recently completed in Homer, Michigan. The first pour is a preliminary test of the facility that ensures all systems are functioning properly and is the first step before production ramp up begins.

During this test, the foundry’s furnaces were charged and the molten raw material from these furnaces was poured into a mold for the first time. All systems in Brembo’s new cast iron foundry performed as expected. 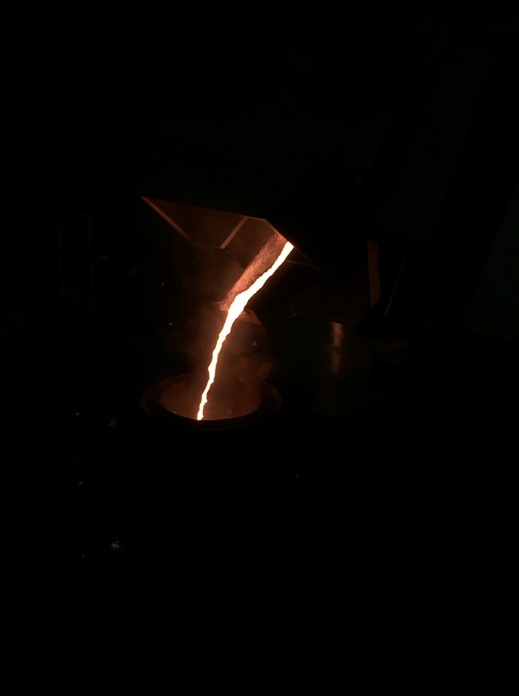 “The startup of our new, state of the art foundry in Homer is further proof of Brembo’s commitment to Michigan and is a key component of Brembo’s continued global expansion”, said Matteo Tiraboschi, deputy executive chairman, Brembo S.p.A.  “The growth of our Homer operation exemplifies our commitment to the North American market, the top geographic market for Brembo worldwide.”

“Having our own dedicated foundry in the United States allows us to have maximum control over our process and costs. Our customers benefit by having a dedicated, fully integrated manufacturing process for their brake components,” added Dan Sandberg, president and chief executive officer, Brembo North America. 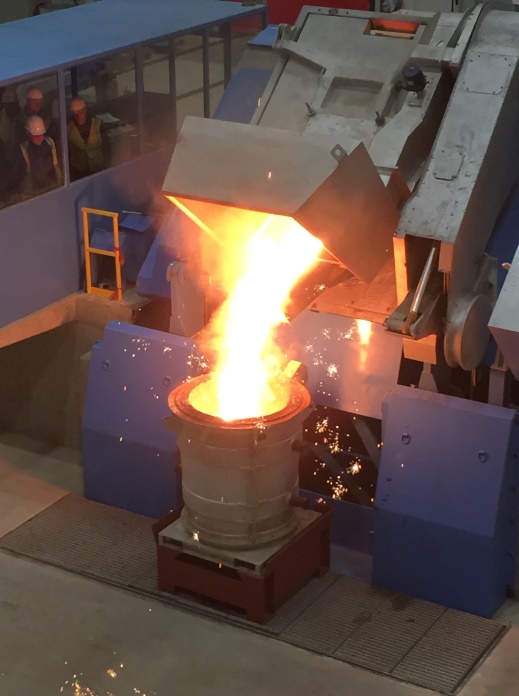 Construction on the 266,000 square foot foundry began in 2015. Brembo will begin production ramp up next month in May and the foundry is expected to be fully operational in 2017.The foundry is adjacent to Brembo’s 440,000 square foot facility that machines discs and drums for the original equipment market. Brembo also operates a caliper and corner module assembly facility at the same location. Since purchasing the Homer disc plant in 2007, as part of the acquisition of Hayes Lemmerz’s brake business, Brembo has continuously expanded its footprint in Michigan. Construction of Brembo’s North American headquarters and Research and Development Center, in Plymouth, Michigan, took place in 2009.The following year, the Homer caliper assembly building was constructed. Since 2009, the Homer disc plant has been expanded three times. Brembo invested $100 million into the Homer cast iron foundry. At full capacity, it will produce an annual output of 80,000 tons of brake disc castings. The foundry operations will cover an area of approximately 300,000 square feet and will create 250 jobs at the foundry and at Brembo’s North American Headquarters in nearby, Plymouth, Michigan.